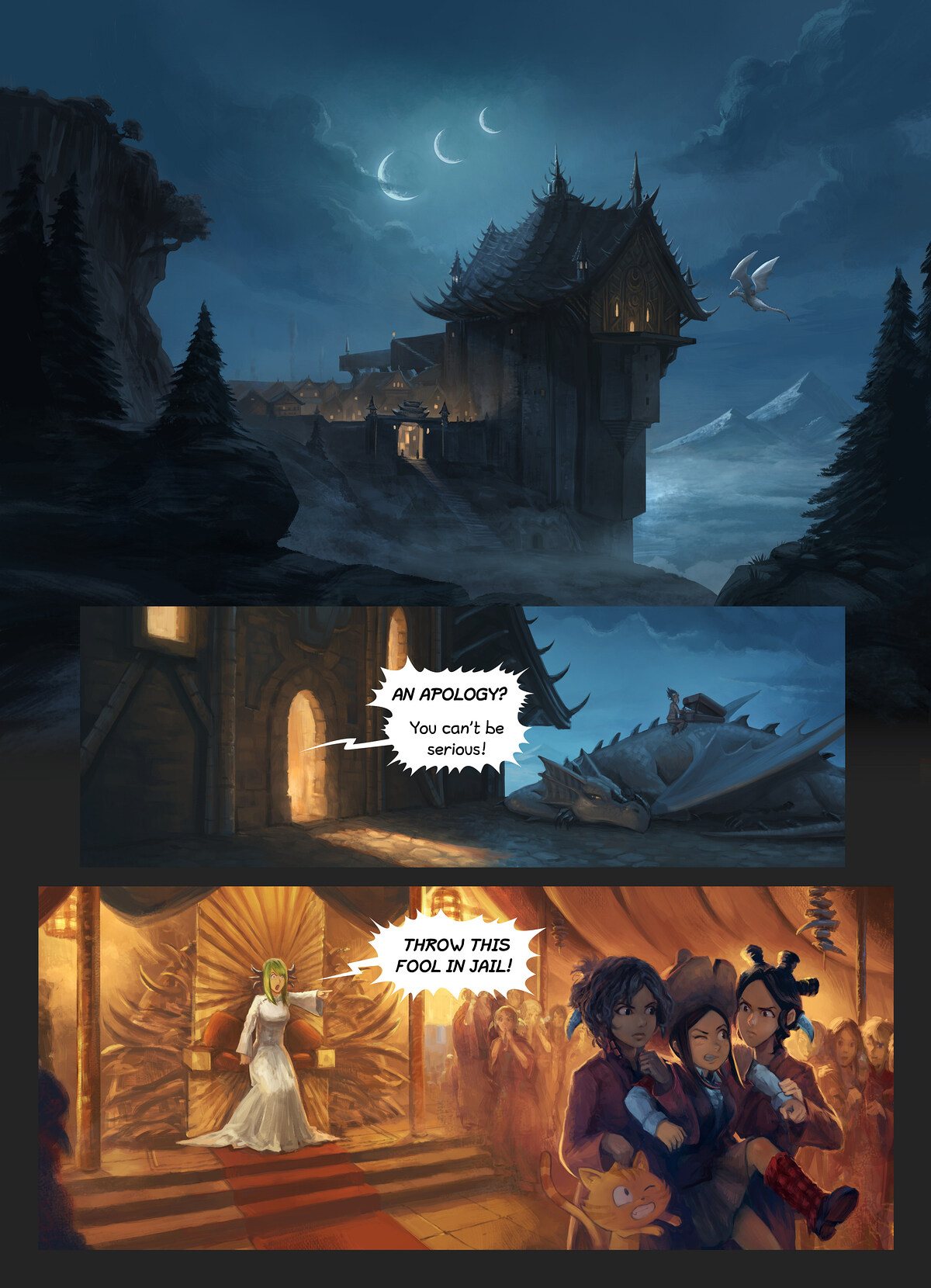 Wasabi: AN APOLOGY? You can't be serious!.
THROW THIS FOOL IN JAIL!. 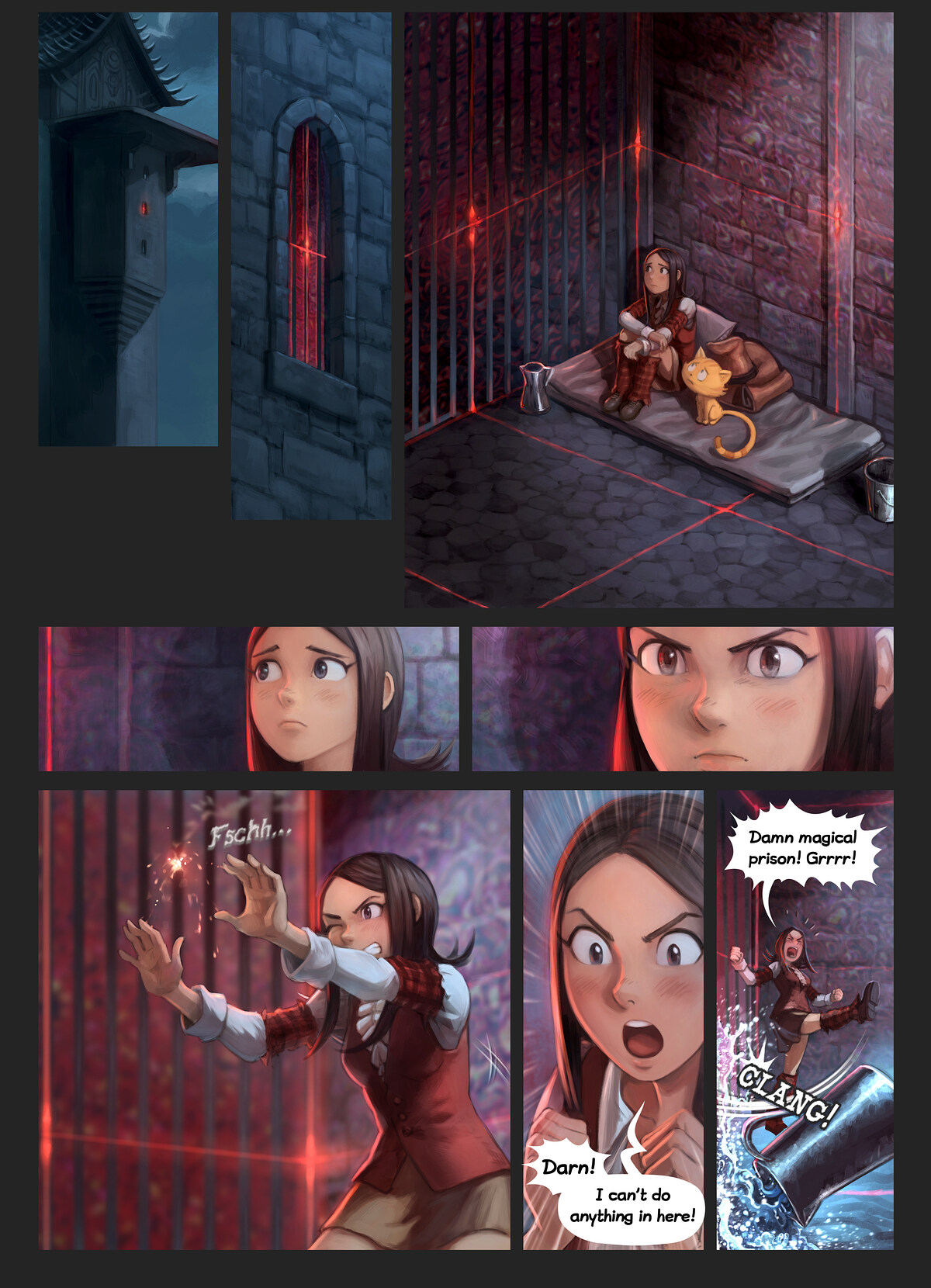 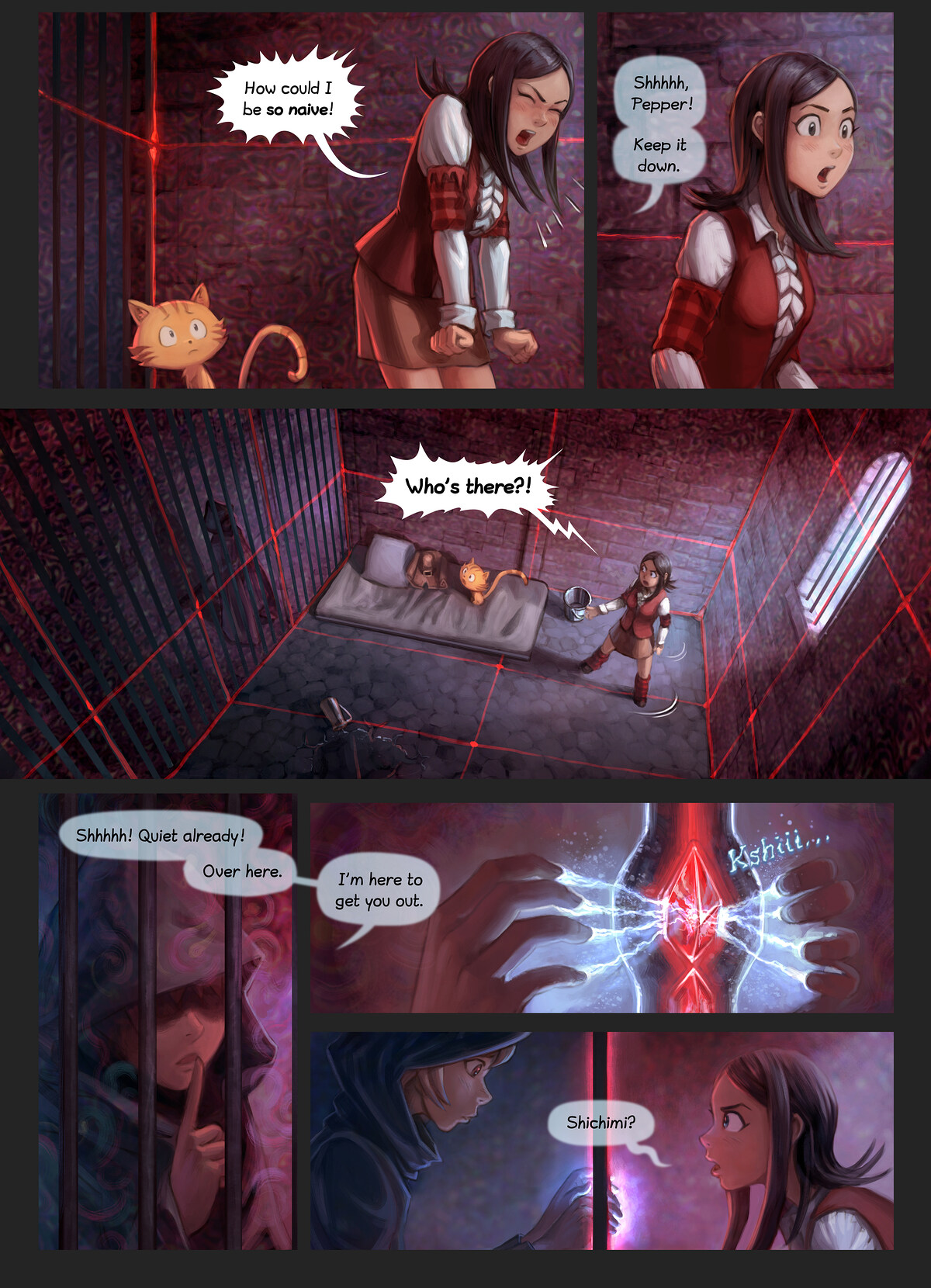 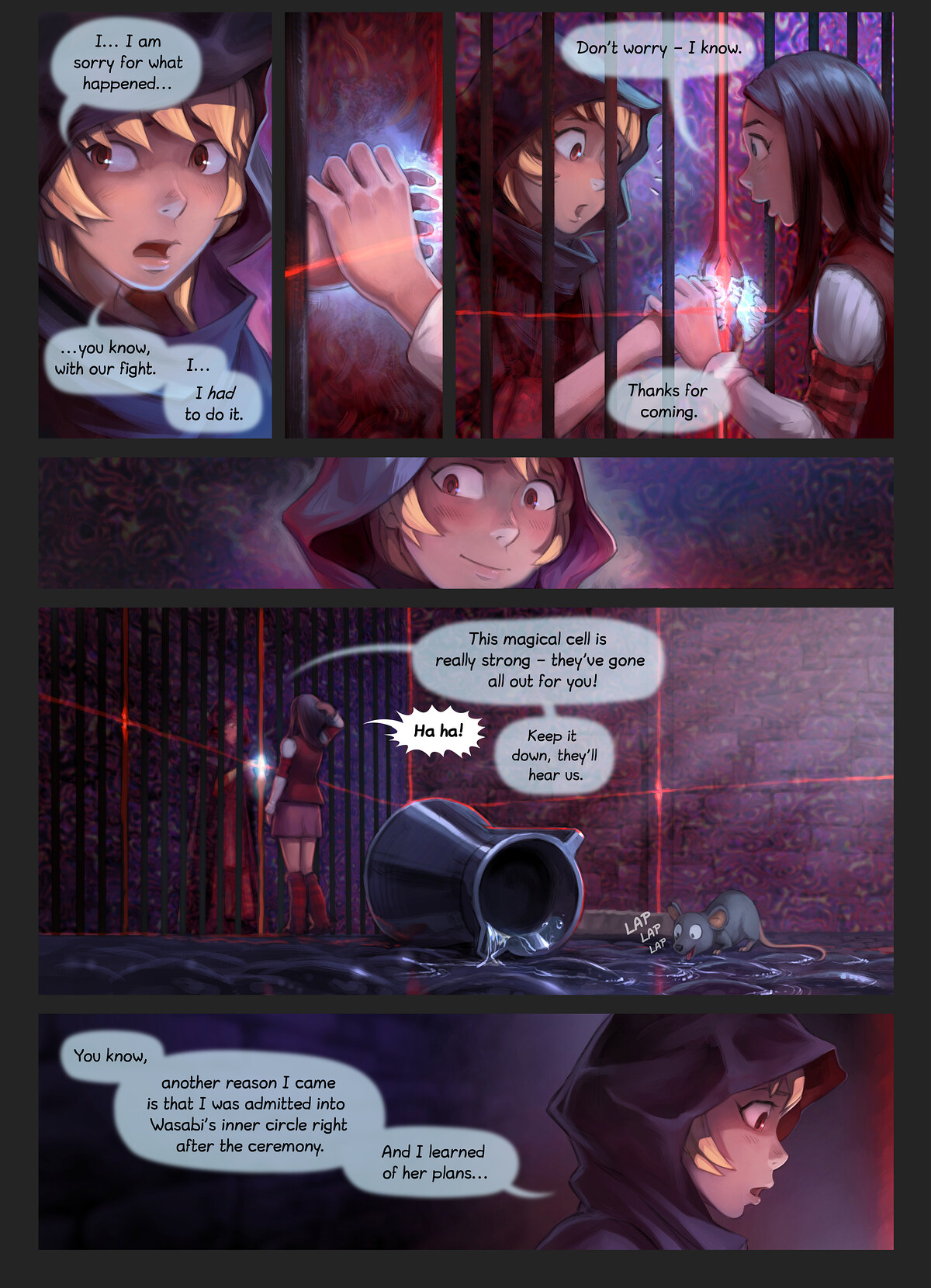 Shichimi: I... I am sorry for what happened... ...you know, with our fight. I... I had to do it..
Pepper: Don't worry – I know. Thanks for coming..
Shichimi: This magical cell is really strong – they’ve gone all out for you!.
Pepper: Ha ha!.
Shichimi: Keep it down, they'll hear us..
Rat: LAP LAP LAP.
Shichimi: You know, another reason I came is that I was admitted into Wasabi's inner circle right after the ceremony. And I learned of her plans.... 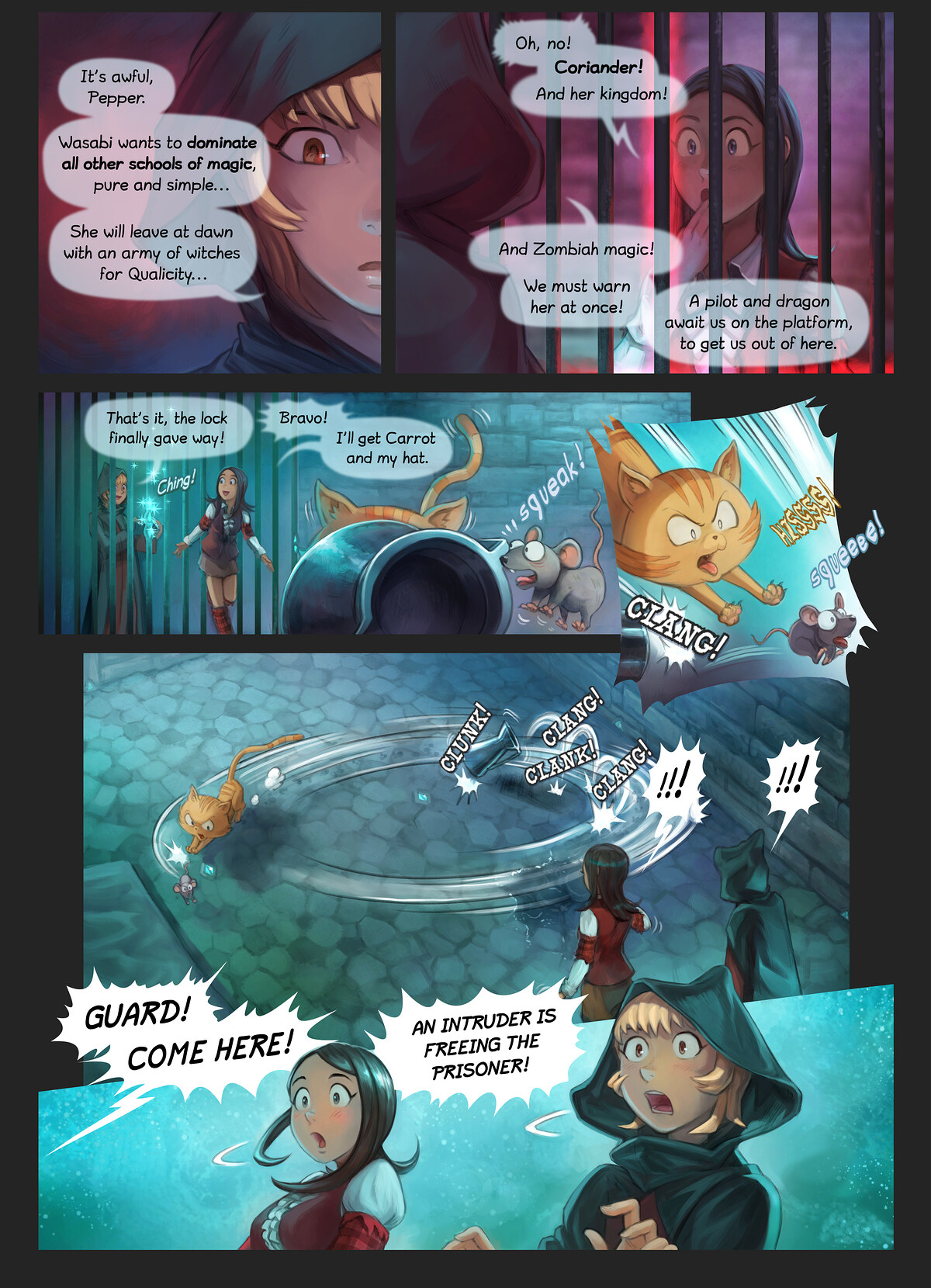 Sound: Bravo! I'll get Carrot and my hat. squeak! HI SS SS ! squeeee!.
Shichimi: CLANG ! CLUNK ! CLANG !.
Pepper: CLANK ! CLANG ! It's awful, Pepper..
Shichimi: Wasabi wants to dominate all other schools of magic , pure and simple... She will leave at dawn with an army of witches for Qualicity... Oh, no!.
Coriander!.
Sound: And her kingdom!.
Pepper: And Zombiah magic! We must warn her at once!.
Rat: A pilot and dragon await us on the platform, to get us out of here..
Carrot: That's it, the lock finally gave way!.
Rat: Ching!.
Pepper: ! ! !.
Shichimi: ! ! !.
Guard: GUARD! COME HERE! AN INTRUDER IS FREEING THE PRISONER!. 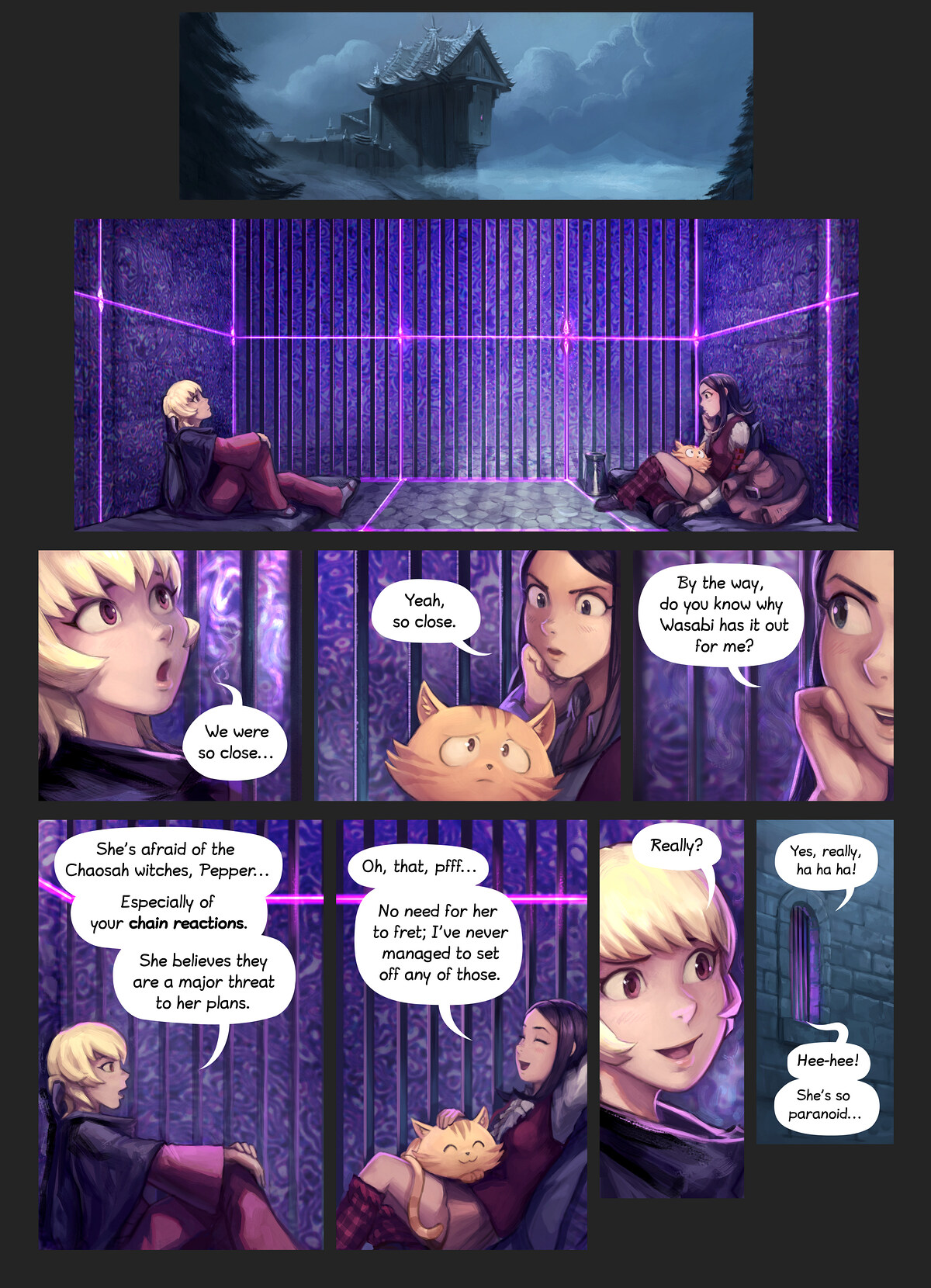 Shichimi: We were so close....
Pepper: Yeah, so close..
By the way, do you know why Wasabi has it out for me?.
Shichimi: She's afraid of the Chaosah witches, Pepper... Especially of your chain reactions . She believes they are a major threat to her plans..
Pepper: Oh, that, pfff... No need for her to fret; I've never managed to set off any of those..
Shichimi: Really?.
Pepper: Yes, really, ha ha ha!.
Shichimi: Hee-hee! She's so paranoid.... 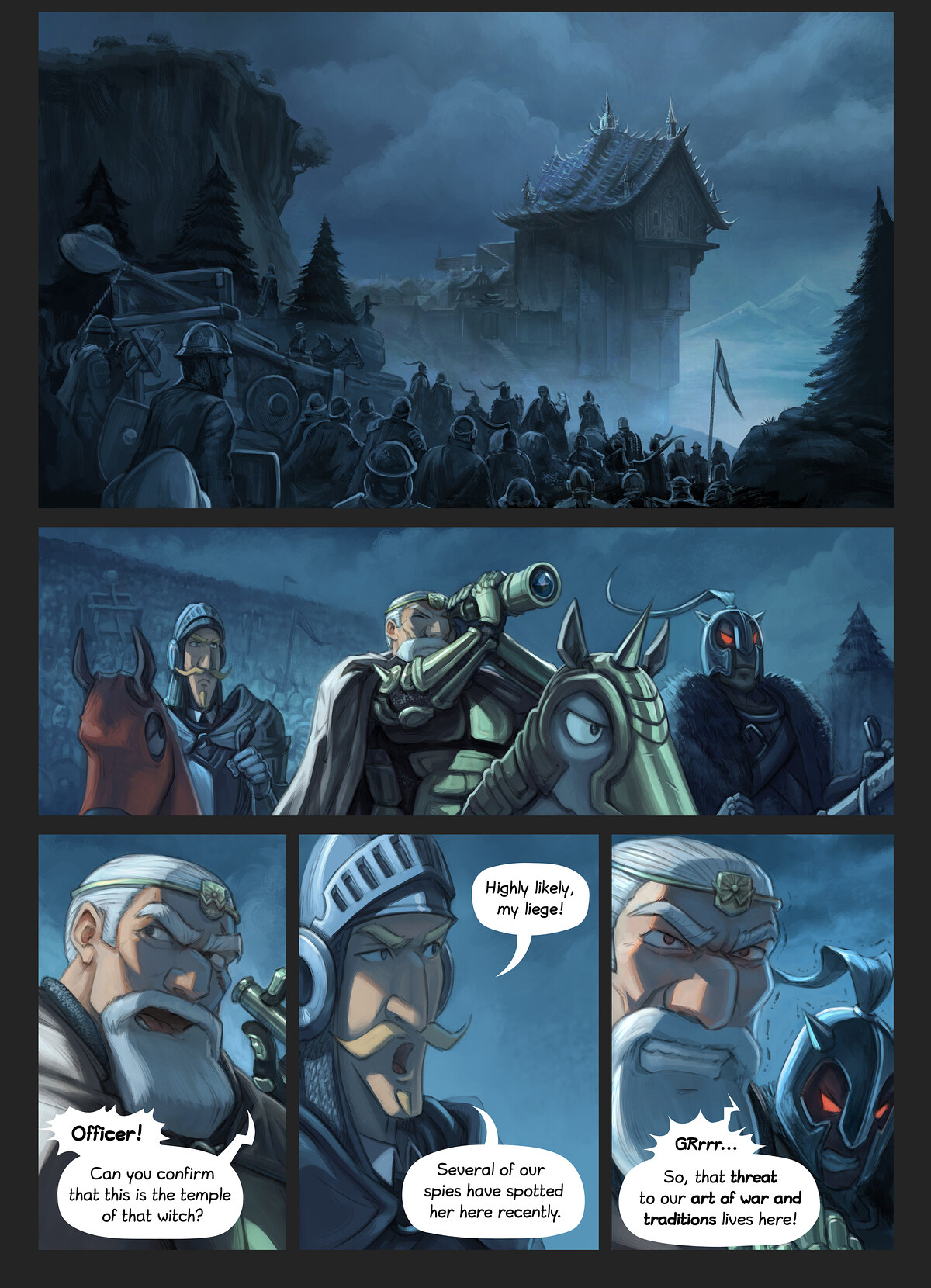 King: Officer! Can you confirm that this is the temple of that witch?.
Officer: Highly likely, my liege! Several of our spies have spotted her here recently..
King: GRrrr... So, that threat to our art of war and traditions lives here!. 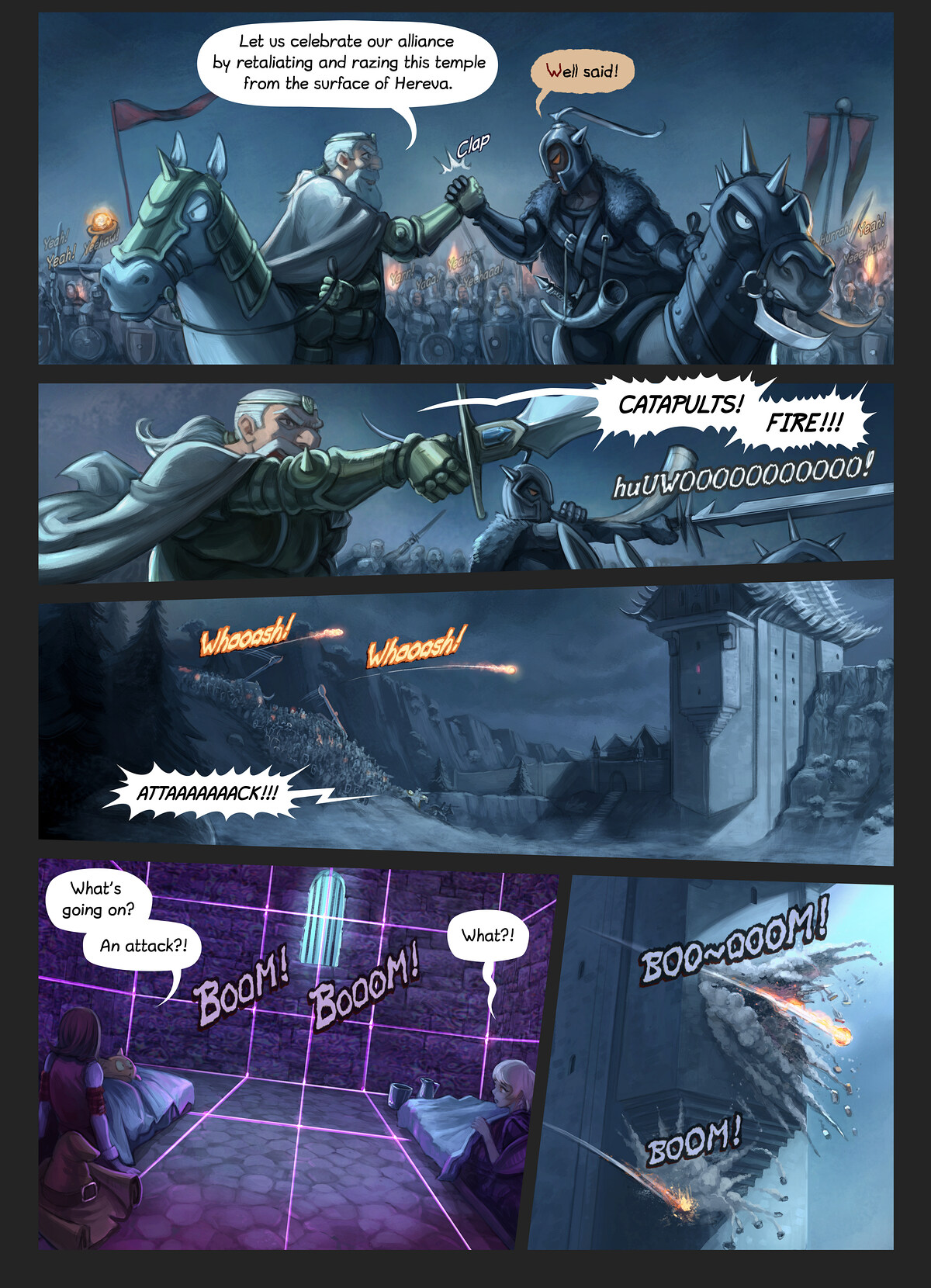 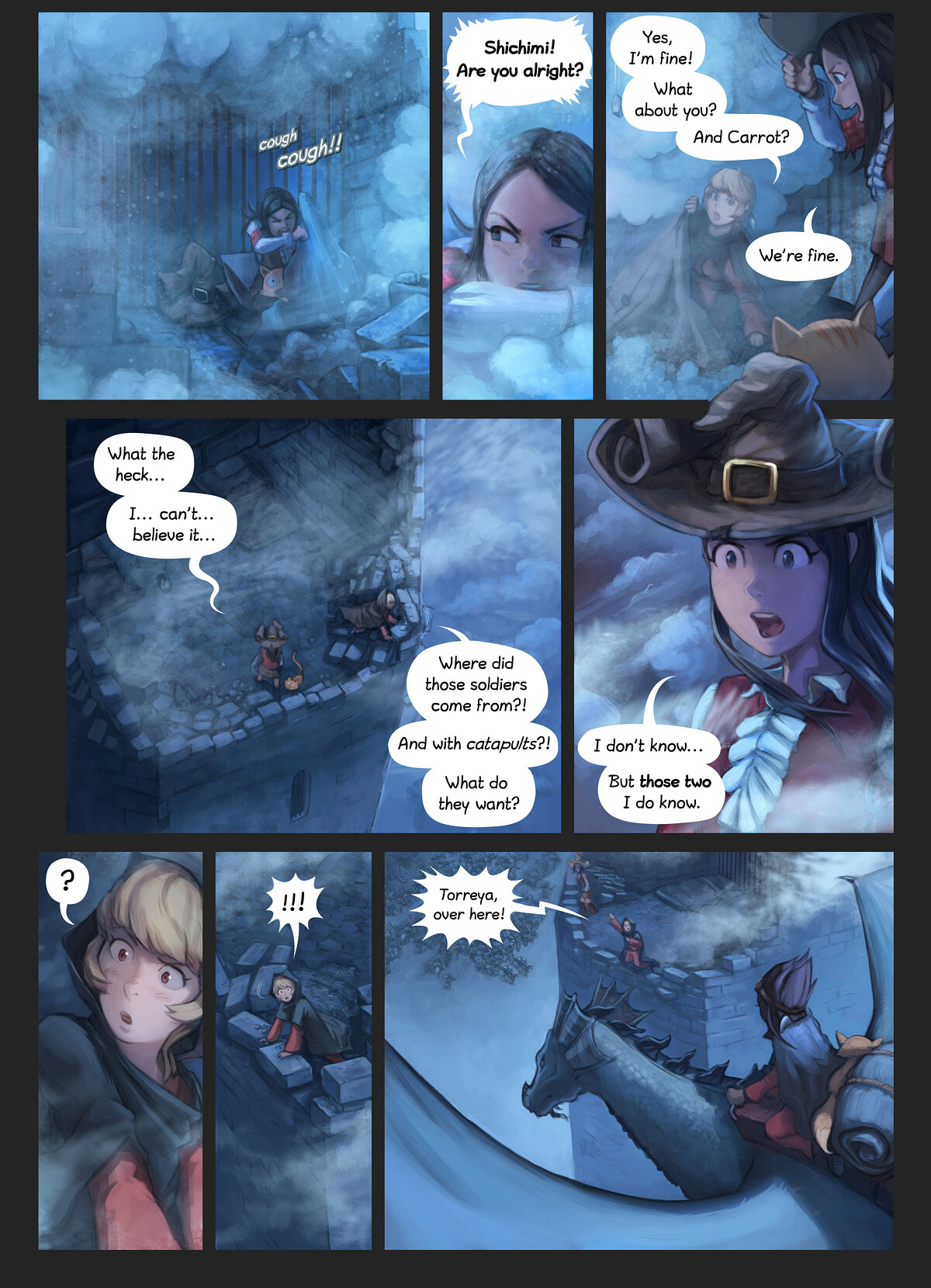 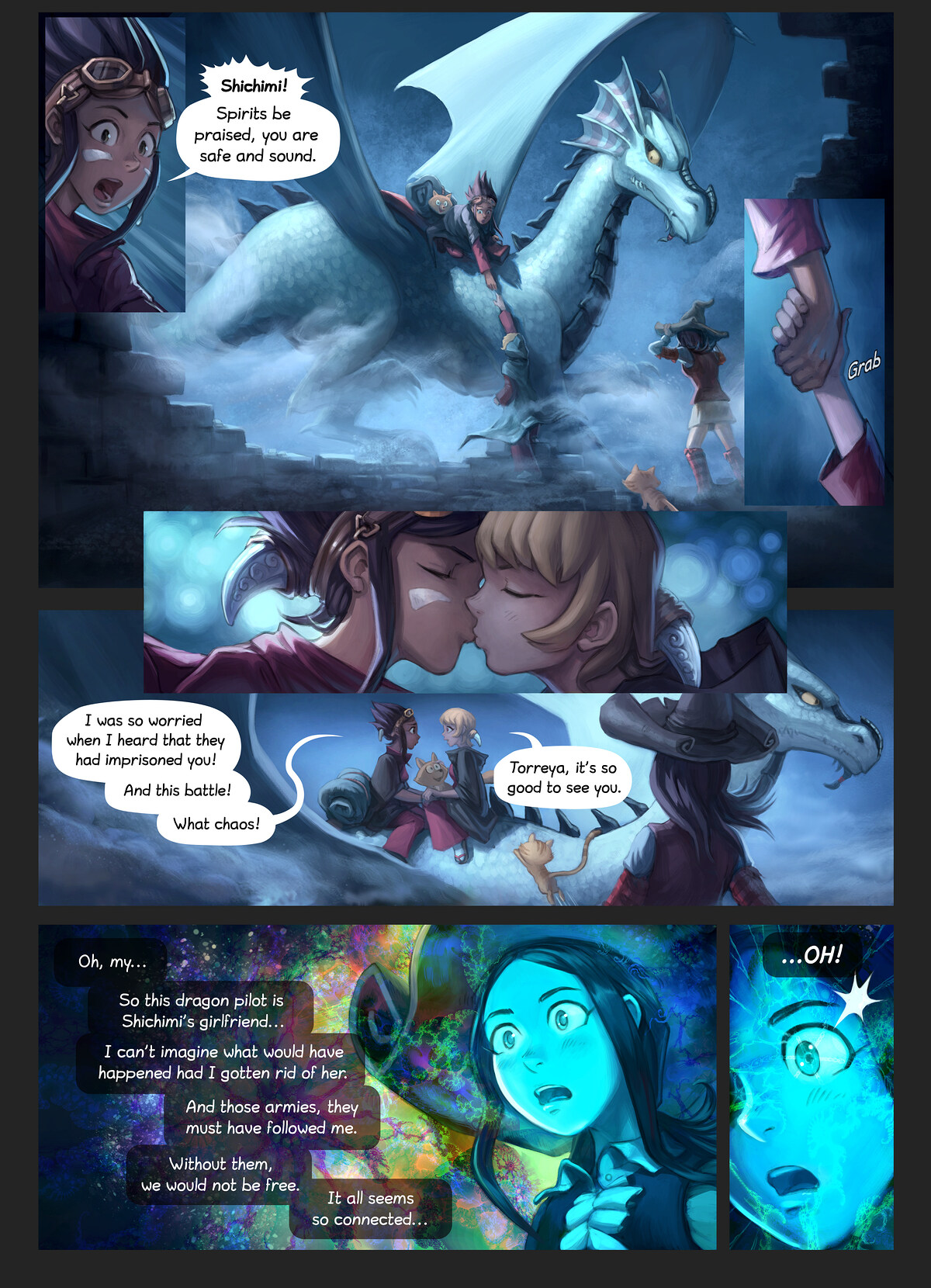 Torreya: Shichimi! Spirits be praised, you are safe and sound..
Sound: Grab.
Torreya: I was so worried when I heard that they had imprisoned you! And this battle! What chaos!.
Shichimi: Torreya, it's so good to see you..
Pepper: Oh, my... So this dragon pilot is Shichimi's girlfriend... I can't imagine what would have happened had I gotten rid of her. And those armies, they must have followed me. Without them, we would not be free. It all seems so connected....
...OH!. 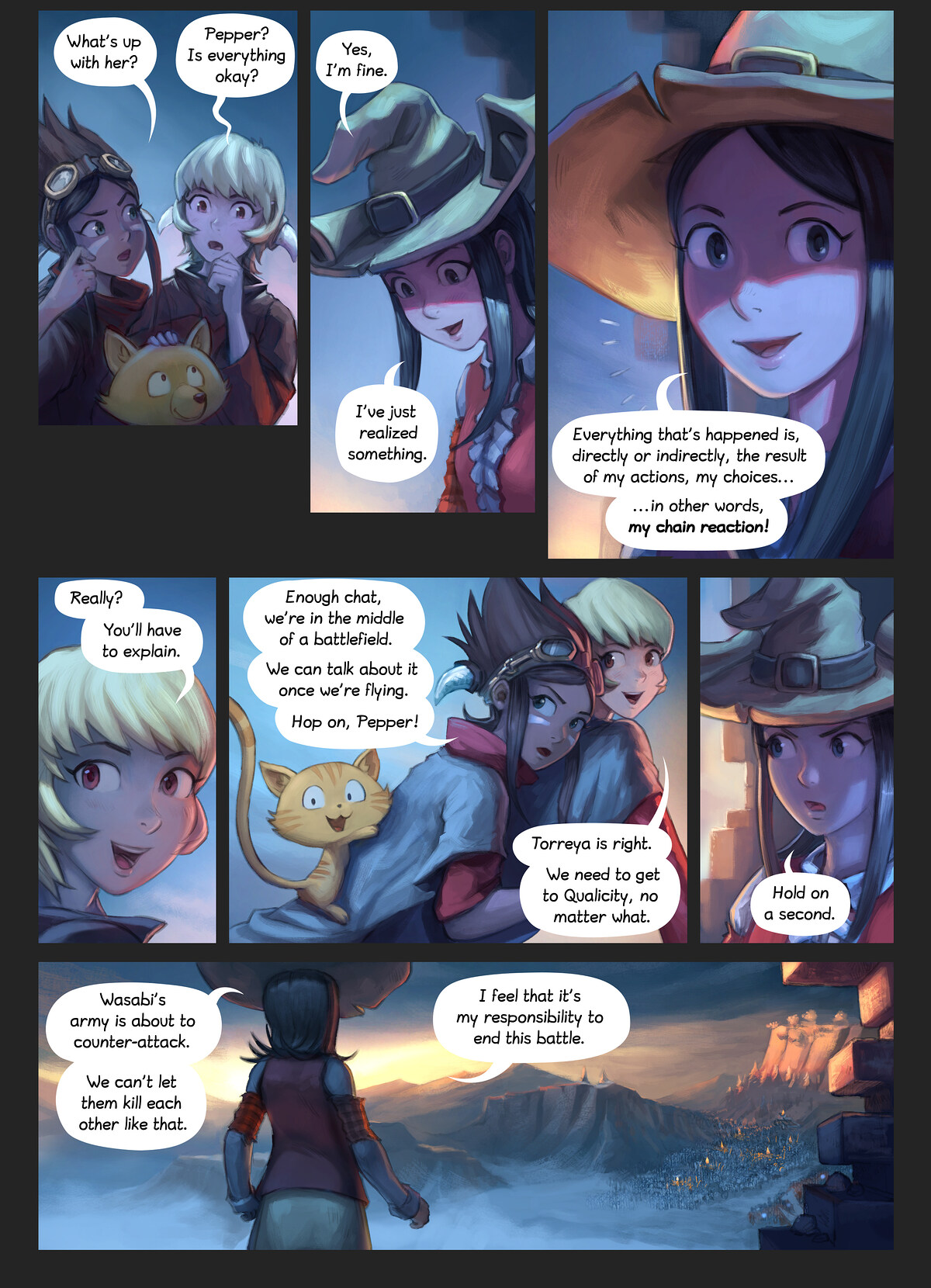 Torreya: What's up with her?.
Shichimi: Pepper? Is everything okay?.
Pepper: Yes, I'm fine. I've just realized something..
Everything that's happened is, directly or indirectly, the result of my actions, my choices... ...in other words, my chain reaction!.
Shichimi: Really? You'll have to explain..
Torreya: Enough chat, we're in the middle of a battlefield. We can talk about it once we're flying. Hop on, Pepper!.
Shichimi: Torreya is right. We need to get to Qualicity, no matter what..
Pepper: Hold on a second..
Wasabi's army is about to counter-attack. We can't let them kill each other like that. I feel that it's my responsibility to end this battle.. 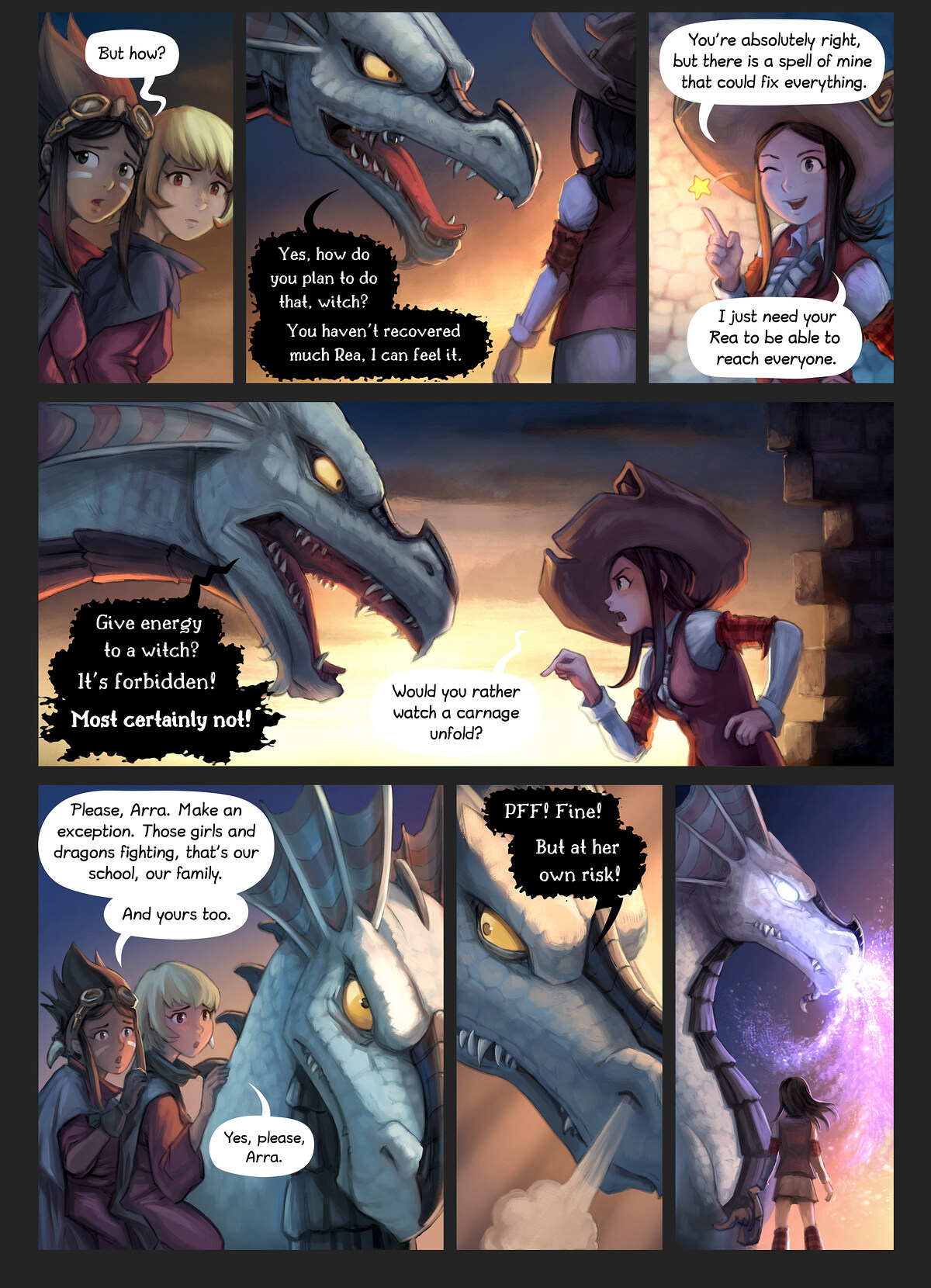 Torreya: But how?.
Arra: Yes, how do you plan to do that, witch? You haven't recovered much Rea, I can feel it..
Pepper: You're absolutely right, but there is a spell of mine that could fix everything. I just need your Rea to be able to reach everyone..
Arra: Give energy to a witch? It's forbidden! Most certainly not!.
Pepper: Would you rather watch a carnage unfold?.
Torreya: Please, Arra. Make an exception. Those girls and dragons fighting, that's our school, our family. And yours too..
Shichimi: Yes, please, Arra..
Arra: PFF! Fine! But at her own risk!. 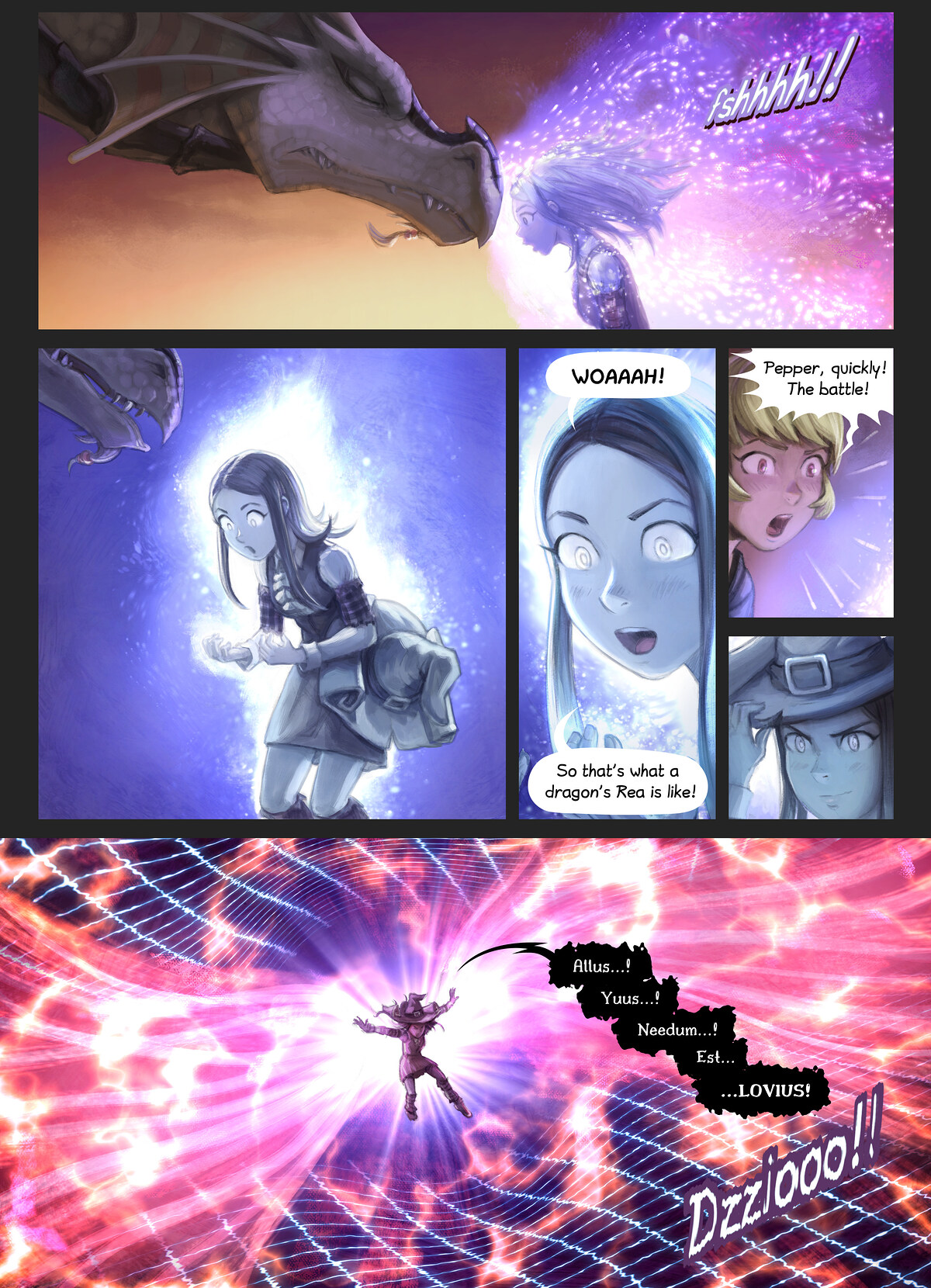 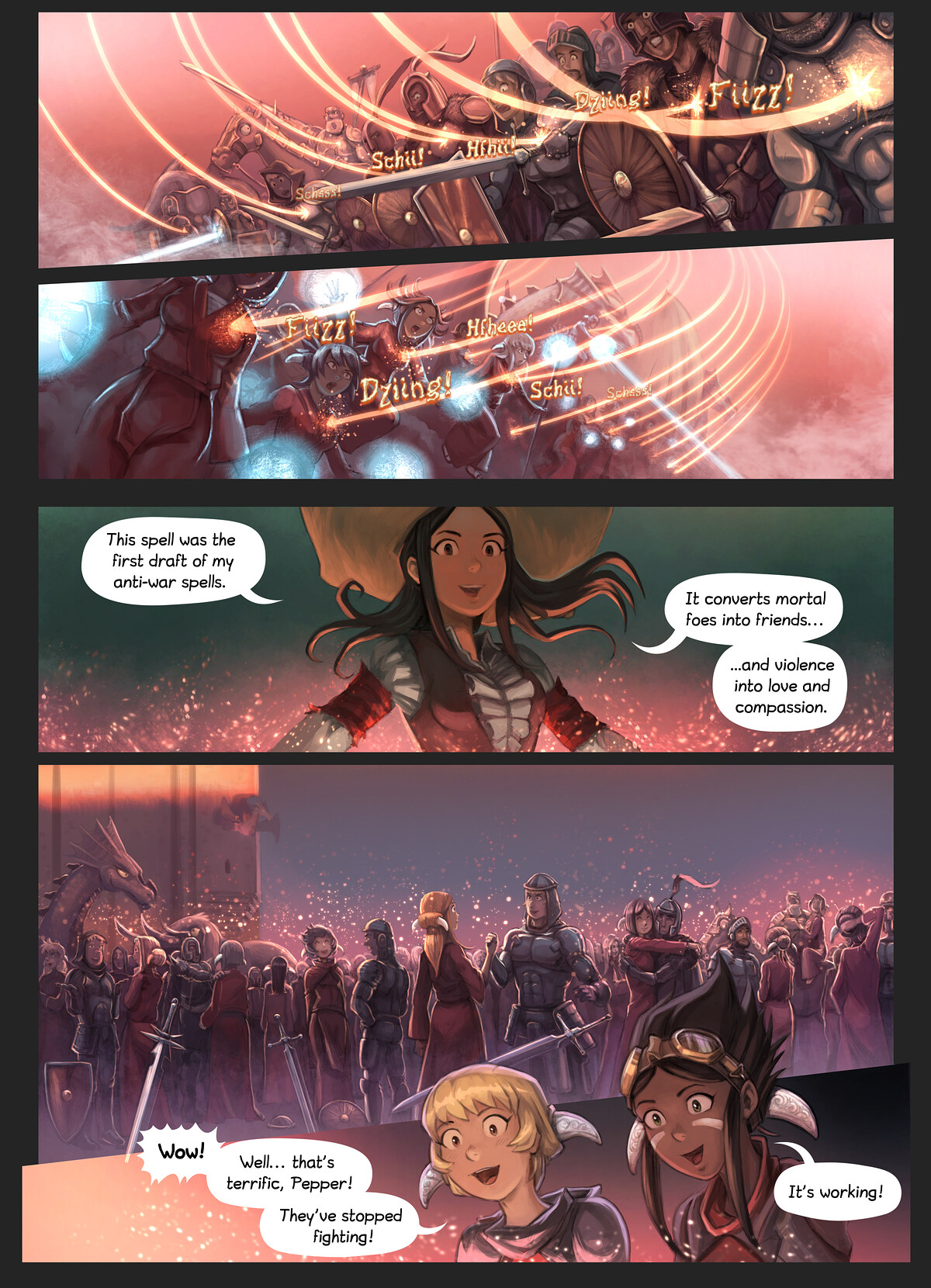 Shichimi: But what's going on? Some of them are kissing...?!.
Torreya: Uh... That's a lot of new couples! Was that meant to happen, Pepper?.
Pepper: Oh, no! I think it was the Dragon's Rea that amplified the love in my spell..
Torreya: Haha, this battle will go straight into the history books..
Shichimi: Hee-hee, definitely!.
Pepper: Ooohhh, how embarrassing!.
Writing: - FIN -.